David Gray, 34-year-old father of two from Rugby, was out house hunting. It was a pleasant August Saturday afternoon, and our man cycles along on his bike. He cycles up a street of suburban semis, where he spots a few retired mature neighbours, chatting to each other over the garden fence. He leans his bicycle against a lamppost and launches softly into his property search.

“Anyone on the road contemplating moving?” David asks, “I am not a landlord or developer, I’m just a Rugby bloke trying to get out of renting, buy a house, do it up and live in it with my wife and two children”

“The only way I will leave here is in a box”, answers an 80-something lady, wearing her fading Paisley patterned housecoat from the 1970’s.

“I‘ve lived here since before you were born, its lovely up here .. we aren’t moving, are we Doris?” (as her neighbour sagely shook his head at his wife).

David, like many Rugby people born in the late 1970’s to the early 1990’s, is keen to get a slice of prime Rugby real estate. Yet people like David in Generation Y (or the Millennials as some people call them i.e. born between 1977 and 1994 and needing family housing now) are discovering, as each year passes by, they are becoming more neglected and ignored when it comes to moving up the property ladder.

Looking at the graph for the UK as whole … 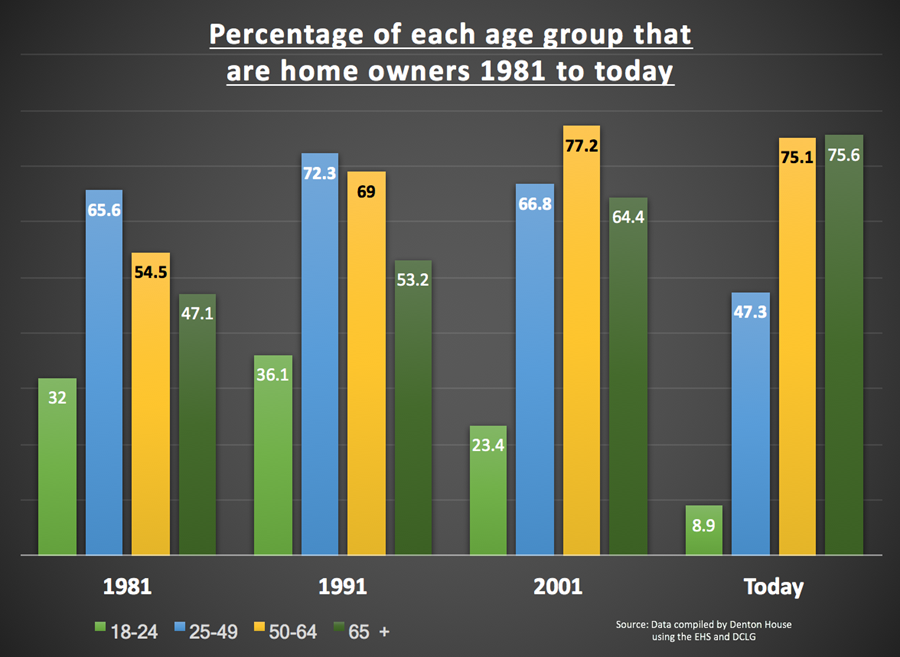 However, the biggest drop has been in the 18 to 24-year old’s, where homeownership has dropped from a third (32%) in the 1980’s to less than one in ten (8.9%) today. Looking at the Rugby statistics, the numbers make even more interesting reading. 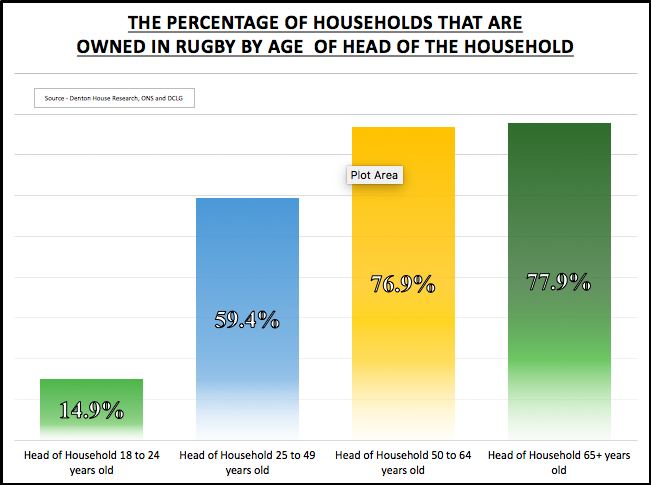 Government policy contributes to the generational stalemate. Stamp Duty rules prevent older Brits from moving as the price of land and planning rules make it harder to build affordable bungalows that are attractive to members of the older generation who want to move.

The average value of an acre of prime building land in the UK is between £750,000 and £800,000 per acre. Bungalows are the favoured option for the older generation, but the problem is bungalows take up too much land to make them profitable for new homes builders. The housing market is gridlocked with youngsters wanting to get on (then move up) the property ladder whilst the older generation, who want to move from their larger houses to smaller, more modern bungalows, can’t. The problem is – there simply aren’t enough bungalows being built and the high price of land, means they are prohibitive to build.

So, what is my point? Well, all I would say to the homeowners of Rugby is that one solution could be to start to talk to your local councillors, so they can mould the planners’ thoughts and the local authority thinking in setting land aside for bungalows instead of two up two down starter homes? That would free the impasse at the top of the property ladder (i.e. mature people living in big houses but unable to move anywhere), releasing the middle aged gridlocked people in the ladder to move up, thus releasing more existing starter homes for the younger generation.

… and to you David … the wandering new home searcher – if things are going to change, it will be years before they do .. so keep going out and spreading the word of your search for a new home for your family.