As we go headlong into 2018, I believe UK interest rates will stay low, even with the additional 0.25% increase that is expected in May or June. That rise will add just over £20 to the typical £160,000 tracker mortgage, although with 57.1% of all borrowers on fixed rates, it will probably go undetected by most buy-to-let landlords and homeowners. I forecast that we won’t see any more interest rate rises due to the fragile nature of the British economy and the Brexit challenge. Even though mortgages will remain inexpensive, with retail price inflation outstripping salary rises, it will still very much feel like a heavy weight to some Rugby households.

Now it’s certain the Rugby housing market in 2017 was a little more subdued than 2016 and that will continue into 2018. Property ownership is a medium to long-term investment so looking at that long-term time frame; the average Rugby homeowner who bought their property 20 years ago has seen its value rise by more than 274%.

This is important, as house prices are a national obsession and tied into the health of the UK economy as a whole. The majority of that historic gain in Rugby property values has come from property market growth, although some of that will have been added by homeowners modernising, extending or developing their Rugby home.

Taking a look at the different property types in Rugby and the profit made by each type, it makes interesting reading.. 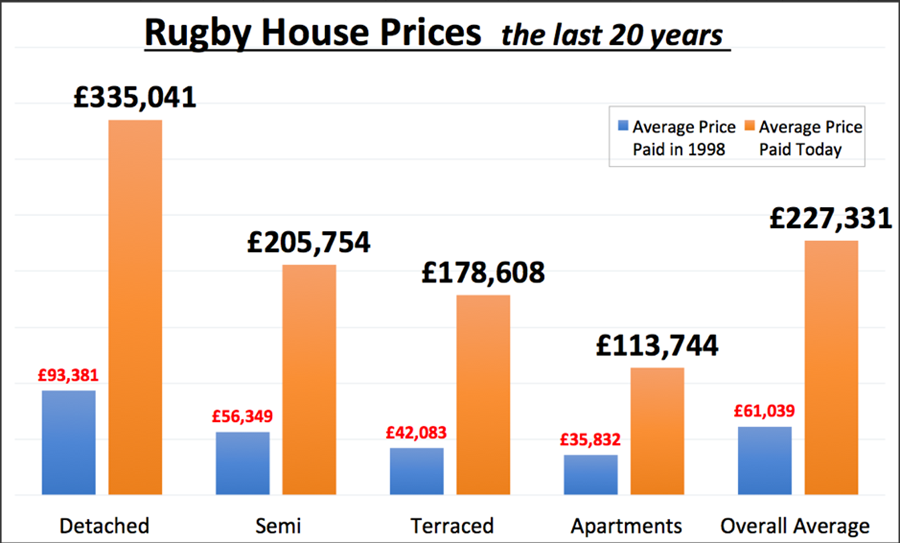 However, I want to put aside all that historic growth and profit and looking forward to what will happen in the future. I want to look at the factors that could affect future Rugby (and the Country’s) house price growth/profit; one important factor has to be the building of new homes both locally and in the country as a whole. This has picked up in 2017 with 217,350 homes coming on to the UK housing ladder in the last year (a 15% increase on the previous year’s figures of 189,690. However, Philip Hammond has set a target of 300,000 a year, so still plenty to go!

Another factor that will affect property prices is my prediction that the balance of power between Rugby buy-to-let landlords and Rugby first-time buyers should tip more towards the local first-time buyers in 2018.

The Council of Mortgage Lenders expects the number of buy to let mortgages to drop by 34% from levels seen in 2015. This is because of taxes being increased recently on buy-to-let and harder lending criteria for buy to let mortgages, which means I foresee a gradual move in the balance of power in favour of first-time buyers rather than buy-to-let landlords. First time buyers will also be helped by The Chancellor eradicating Stamp Duty for all properties up to £300,000 bought by first-time buyers in the recent budget.

This means Rugby buy-to-let landlords will have to work smarter in the future to continue to make decent returns (profits) from their Rugby buy-to-let investment. Even with the tempering of house price inflation in Rugby in 2017, most Rugby buy to let landlords (and homeowners) are still sitting on a copious amount of growth from previous years.

The question is, how do you, as a Rugby buy to let landlord ensure that continues?

Since the 1990’s, making money from investing in buy-to-let property was as easy as falling off a log. Looking forward though, with all the changes in the tax regime and balance of power, making those similar levels of return in the future won’t be as easy. Over the last ten years, I have seen the role of the forward thinking letting agents evolve from a ‘rent collector’ and basic property management to a more holistic role, or as I call it, ‘landlord portfolio strategic leadership’. Thankfully, along with myself, there are a handful of letting agents in Rugby whom I would consider exemplary at this landlord portfolio strategy where they can give you a balanced structured overview of your short, medium and long-term goals, in relation to your required return on investment, yield and capital growth requirements. If you would like such advice, speak with your current agent – or whether you are a landlord of ours or not – without any cost or commitment, feel free to drop me a line at 01788 820028.

Looking at the newspapers between Christmas and New Year, it seemed that this year’s sport in the column inches was to predict the future of the British housing market. So to go along with that these are my thoughts on the Rugby property market.

With the average 5-year fixed rate mortgage at 1.98% (down from 3.47% in 2014) and 2-year fixed rate at 1.47% (down from 2.37% in 2014), mortgage interest rates offered by lenders are at an all-time low (even with the slight increase on the Bank of England base rate a few months ago). Added to this, there has been a low unemployment rate of 4.1% in Rugby, which has contributed to maintain a decent level demand for property in Rugby in 2017 (interestingly – an impressive 1,287 Rugby properties were sold in last 12 months), whilst finally, the number of properties for sale in the town has remained limited, thus providing support for Rugby house prices, meaning …

Rugby Property Values are 6.2% higher than a year ago

However, moving into 2018, there will be greater pressures on people’s incomes as inflation starts to eat into real wage packet growth, which will wield a snowballing strain on consumer confidence. Interestingly though, information from the website Rightmove suggested over a third of property it had on its books in October and November had their asking prices reduced, the highest percentage of asking price reductions in the same time frame, over five years. Still, a lot of that could have been house-sellers being overly optimistic with their initial pricing.

In terms of what will happen to Rugby property values in the next 12 months, a lot will be contingent on the type of Brexit we have and the impact on the whole of the UK economy. A lot of people will talk about the Central London property market in the coming year, and if the banking and finance sectors are negatively affected with a poor Brexit deal, then the London market is likely to see more of an impact.

Nevertheless, the bottom line is Rugby homeowners and Rugby landlords should be aware of what happens in the rollercoaster housing market of Central London, but not panic if prices do drop suddenly there in 2018. Over the last 8 years, the Central London property market has been in a world of its own (Central London house prices have grown by 89.6% in those last 8 years, whilst in Rugby, they have only risen by 47.5%). So we might see a heavy correction in the Capital, whilst more locally, something a little more subdued.

Hindsight is always better than foresight and predicting anything economic is all well and good when you know what is around the corner. At least we have the Brexit divorce settlement sorted and, as the UK economy and the UK housing market are intertwined, it all depends on how we deal as a Country with the Brexit issue. However, we have been through the global financial crisis reasonably intact … I am sure we can get through this together as well?

Oh, and house prices in Rugby over the next 12 months? I believe they will end up between 0.6% lower and 1% higher, although it will probably be a bumpy ride to get to those sorts of figures.