A drop in available properties is pushing asking price rents to record highs, Rightmove has reported.

The portal says that available stock has dropped 8.7%, exacerbated by a 19.4% fall in London.

National asking prices for new rents, excluding London, in the third quarter this year are £802.

It is the first time that average asking rents outside London have been over £800.

“The exit of more landlords from the buy-to-let market has been due to a raft of different factors.

“What we’re left with is a lack of available homes for tenants looking to find their next place to rent, meaning that when the right kind of property does come along it isn’t sticking around for very long before it’s snapped up.”

I have been doing some research, looking both at National and Regional reports on the demand and supply of property and people together with future projections on the economy, population and family demographics with some interesting results.  According to the Office of National Statistics, in the last financial year nationally, private renting grew by 74,000 households, whilst the owner occupied dwelling stock increased by 101,000 and social (aka council and housing association) stock increased by 12,000 dwellings.

It was the private rental figures that caught my eye.  With eight or nine years of recovery since the Credit Crunch, economic recovery and continuing low interest rates have done little to setback the mounting need for rented housing.  In fact, with house price inflation pushing upwards much quicker than wage growth, this has meant to make owning one’s home even more out of reach for many Millennials, all at a time when the number of council/social housing has shrunk by just over 2.5% since 2003, making more households move into private renting.

There are 10,886 people living in 4,771 privately rented properties in Rugby.

In the next nine years, looking at the future population growth statistics for the Rugby area and making careful and moderate calculations of what proportion of those extra people due to live in Rugby will rent as opposed to buy, in the next ten years, 4,665 people (adults and children combined) will require a private rented property to live in.

Therefore, the number of Private Rented homes in Rugby will need to rise by 2,045 households over the next nine years,

That’s 227 additional Rugby properties per year that will need to be bought by Rugby landlords, for the next nine years to meet that demand.

… and remember, I am being conservative (with a small ‘c’) with those calculations, as demand for privately rented homes in Rugby could still rise more abruptly than I have predicted as I would ask if Theresa May’s policies of building 400,000 affordable homes (which would syphon in this 5-year Parliamentary term is rather optimistic, if not fanciful?

So, one has to ask wonder if it was wise to introduce a buy to let stamp duty surcharge of 3% and the constraint on mortgage tax relief could curtail and hold back the ability of private landlords to expand their portfolios?

Well a lot of landlords are taking on these new hurdles to buy to let and working smarter.  Buying the property at the right price and using an agent to negotiate on your behalf (we do this all the time) … and the 3% stamp duty level isn’t an issue.  Incorporating your property portfolio into a Limited Company is also a way to circumnavigate the issues of mortgage tax relief (although there are other hurdles that need to be navigated on that tack), but just look at the growth of proportion of Buy to Let properties in the Country since the Summer of 2016 … something tells me smart Landlords are seeing these challenges as just that … challenges which can be overcome by working smarter. 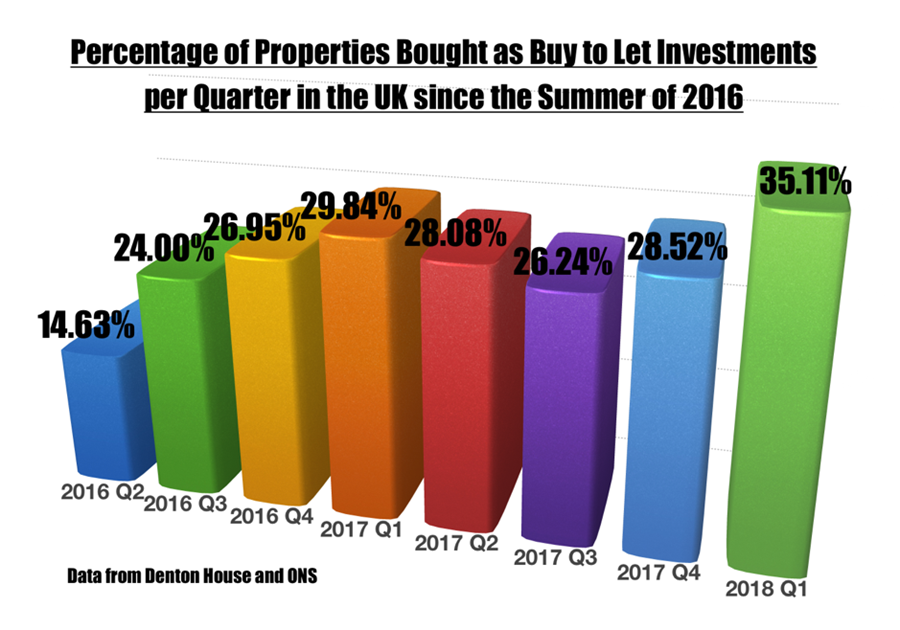 I have a steady stream of Rugby landlords every week asking me my opinion on the future of the Rugby property market and their individual future strategy and, whether you are a landlord of mine or not, if you ever want to send me an email or pop into my office to chat on how you could navigate these new Buy to Let waters … it will be good to speak to you (because you wouldn’t want other landlords to have an advantage over you – would you?).

And if it does … who will be the winners and losers?

Those Rugby people wanting property values to drop would be those 30 or 40 something’s, sitting on a sizeable amount of equity and hoping to trade up (because the percentage drop of your current ‘cheaper’ property will be much less than the same percentage drop of the more expensive property – and trading up is all about the difference). If you have children planning to buy their first home or you are a 20 something wanting to buy your first home – you want them to drop. Also, landlords looking to add to their portfolio will want to bag a bargain (or two) and they would love a drop!

So, before I discuss my thoughts on the future, it’s important to look at the past… 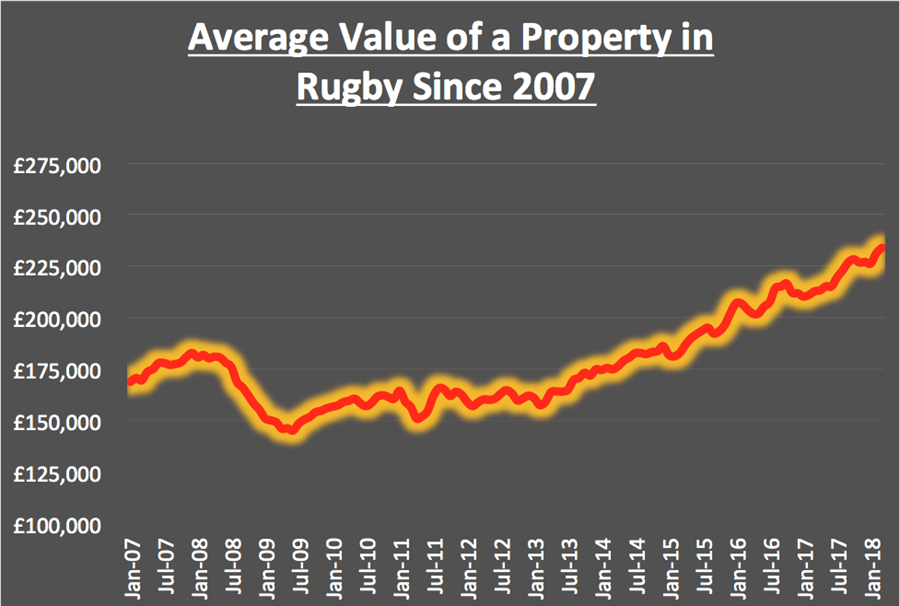 So … what is happening now?

The simple fact is people in the UK are moving less (and hence buying and selling less). Estate agents up and down the land are blaming “Brexit” for this but the reality is that the problems in the British housing market are a lot greater than measly old Brexit!

There is a direct link between how people feel about the property market (sentiment) and the actual performance of the property market. However, the question of whether people’s sentiment moves as a result of changes in the property market, or whether changes in the property market drive sentiment is a question that baffles most economists – you see if someone feels assured about their financial situation (job, money etc.) and the future of property, they are more likely to feel assured to spend their hard-earned earnings on property and buy and if you think about it … vice versa. So, I believe Brexit isn’t the issue  – it’s just the “go to” excuse people are using. Humans don’t like uncertainty, and Brexit itself is causing uncertainty – it is, after all, the great unknown.

So, is it the flux of global politics? Politics are causing hesitation in the posh £5m+ markets of Mayfair and other high value Monopoly board pieces – but certainly not in sleepy old Rugby (I don’t think Rugby is too high up on the house buying list of all these Saudi Prince’s and Russian Oligarchs) … no the issues are much closer to home.

So, coming back to reality, one the biggest driving factors in the current state of play in housing market has been the part Buy To let landlords have played in the last 15 years. Making money as buy to let landlord in these golden years was as easy as falling off a log – but not anymore! Landlords had been getting off quite lightly when it came to their tax position, but with Osborne changing the taxation rules on buy to let … things have become a little more difficult for landlords.

Landlords have been hit with a supplementary rate of stamp duty, meaning they pay 3% more stamp duty than first time buyers. High rate taxpayers in the past have been able to offset the interest payments from their buy to let mortgages against their self-assessment tax bills – at their marginal rate. Between now and 2020 … this is being reduced in small steps, so they will only be able to claim back relief at the basic rate of tax. The bottom line is that it will be much tougher for investors to make money on buy to let. Tied in with this, the mortgage rules were changed a few years ago, meaning it’s also become slightly tougher to obtain buy to let mortgages (although if I’m being honest – they need too).

And what of Rugby first time buyers? Well, a few weeks ago in my blog on the Rugby Property Market, if you recall, I mentioned that last year was the best year for over decade for first time buyers. For the last 30 years, buy to let investors have constantly had more purchasing power than first time buyers, as they were older and more established, together with their tax breaks. Yet, now as many amateur landlords are having second thoughts in staying in buy to let, this has given first time buyers a chance to get on to the property ladder.

What will happen to Rugby property values? The simple fact is we don’t have the conditions that caused the crash in 2007 (i.e. sub-prime lending in the US, causing banks not to lend to each other, thus stalling the global economy as a whole).Assuming everyone is sensible on the Brexit negotiations, the biggest issue is interest rates.  As long as interest rates remain comparatively low (and don’t get me wrong – I think we could stand Bank of England base interest rates at 1.5% to 2.5% and still be OK, then the thought of a massive property market crash still looks improbable.

The double-digit growth years in property values between 1999 and 2004 are well gone. A lot of that growth was caused by an explosion of buy to let landlords buying property to accommodate the influx of EU migrants in those years.  Mark Carney at the Bank of England can’t make interest rates any lower, so it’s difficult to envisage how credit conditions can get any easier!

Balance of probabilities … Rugby property values will hover either side of inflation over the next five years, but if we did have another crash, what exactly would that mean to Rugby homeowners – if they dropped by the same percentage amount, as they did in the last crash?

If Rugby property prices dropped today by the same percentage as they did locally in the Global Financial Crisis back in 2007/9 … we would only be returning to the property values being achieved in November 2015 … and nobody was complaining about those!

Therefore, looking at the number of people who have bought homes in the area since November 2015, that would affect approximately only 17% of local home owners and landlords … and only a small percentage would actually lose – because you only lose money if they decide to move (and come to think of it, some of those sellers would fall into the category mentioned above that would relish a price drop!). So, really not many people would lose out.